5th place of the Risco Software company in the IT@Bank ranking for 2016!

We are very happy to inform you that we have ranked fifth in the IT@Bank ranking for 2016, which has been announced during the IT@Bank conference today.

The yearly ranking of the Miesięcznik Finansowy BANK monthly is the most important ranking of the IT companies which work for the financial sector. After our success last year, when we ranked fourth, this year we are still among the top leading IT companies working for – among other branches – the banking sector. That is a great success of our whole team, including programmers, analysts, testers, and developers of new products.

This year our company has also participated in the fairs organized within the framework of the IT@Bank event. We presented our new products, including Risco JPK, Risco Electronic Seizures, and Risco Text Recognition, for the first time. Meetings with clients during those fairs and conferences resulted in new trade contacts obtained by the recently organized Sales Department.

In the photograph: our team at the IT@Bank fairs – Marcin, Czarek, and Kamil. 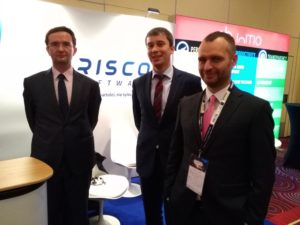